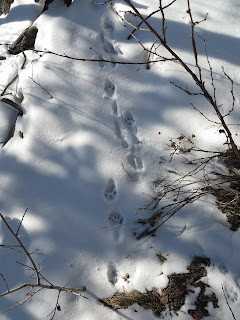 My boss remarked to me that he was not surprised that I couldn’t simply just leave the cats alone on Christmas Eve. “Planning to destroy some bobcat’s Christmas?” I believe this was his exact statement when I told to him I intended to spend a portion of Christmas Eve, not at my warm house with my family, but rather in the cold mountains. I had already spent two of the prior three days out scouting and calling for Mountain Lions, (look for more on this soon in a future post entitled, “The Grind”). During these adventures I had located and patterned several bobcats. As an early gift to myself I was planning to take a break from Lions and try to call the little cats. 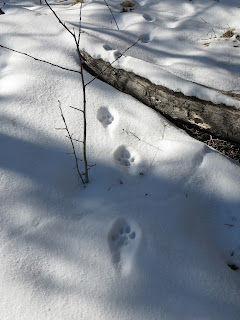 The first stand of the morning produced nothing but increasing windy conditions with the growing light of morning. While driving to my next call stand, I discovered some extremely fresh bobcat tracks traversing the road. Due to the wind and the blowing snow I knew the cat was close and could not have been here to long before. I quickly and quietly loaded up and headed out following the tracks. The bobcat roamed through a pine stand, traveled down logs and jumped on the occasional rock. At one point he crossed the path of a rabbit and followed it to its burrow in a large rock formation. The wind started gusting to the point where it was covering the cat’s tracks with snow and I eventually lost the trail entirely. I set up a call stand at the end of the tracks and called for approximately 40 minutes. The cat never appeared. I guess he decided to spend his Christmas in the woods rather than with me, riding home in the back of my truck.

The snowfall and wind had obliterated all of the prior evenings tracks. The weather conditions were so averse to tracking that as I walked backed to my truck I could actually watch my own footprints vanish from existence behind me. I decided that it was time to head home and let the kitties have their Christmas Holiday; all bets are off come the 26th though!

At this time, I am working on adding a component of video blogging to my posts. Below is my first attempt at this, please stay with me and try not to laugh too hard or for too long.