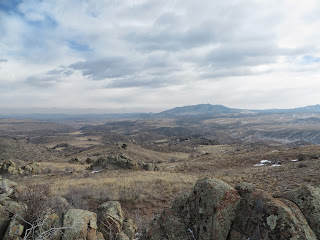 I had originally planned on this post to be entitled, “The Grind.”  The post was to reference a recent two day adventure in the hills in search of lions and their spoor.   This particular quest resulted in a large amount of information gained, a lot of calling, miles of walking and one injured knee.  The latter left me exploring my couch and the National Geographic channel for several days, instead of rocky peaks and long valleys of Northern Colorado.   During this time I reflected on the name of the soon to be post and did not believe it conveyed what I was feeling on the matter or intended.  Hence the name was changed to better demonstrate how I feel about what I need in my search for Mountain Lions.


I need just one thing.  This thing is not a material object or hunting implement, lord knows I have a lengthy list of items.  Some of the items on the list are: A new electronic caller to replace my ancient Johnny Stewart 512 cassette caller.  The unit is so old, if my recollection serves me correctly; I obtained it by bartering with a caveman in return for plans for this new-fangled invention called the, “Wheel.” Also on this list is a new set camouflage, better binoculars, spotting scope, bullets...I could go on and on, as any Cabela’s catalogue wielding sportsman could do. These are things I think I need, besides why would a hand caller need a new electronic call?


This thing I need is not really a tangible item at all.  It is the idea that gets me up in the morning at 5 A.M.  The determination which keeps me going despite the cold, the wind, the snow, and even the occasional naysayer.  This thing is really an opportunity.  It is the fresh lion track that you find, the kind of track which is so fresh it sends shiver down your spine because there is serious possibly the cat is watching you.  It is the hope that a cougar face will suddenly appear around a bush or rock while you are sitting on your call stand doing your best to sound like a dying rabbit. This opportunity is in the stillness that follows your production of a lion whistle, just hoping for a return call from the real thing. It is in the flock of crows you see in the distance, praying they are feeding on a recent lion killed deer carcass.  It is in the telephone call from a sympathetic land owner as you wait with baited breath that they have news of lion sighting or preyed upon livestock. This is the thing I need, I know I am close and I am just waiting for the break that will put in proximity to a Mountain Lion. 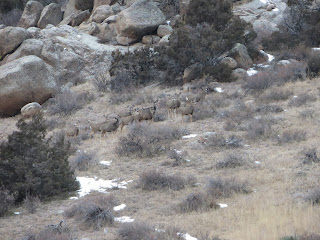 What started the two day grind in the hills was almost the opportunity I need.  I received a telephone call from a local ranger who reported he had discovered a dead deer about a week prior.  The ranger said the deer appeared covered and cached, and he believed it was a lion kill.   When he told me the location of the kill I immediately recognized the area.  It is one of the valleys I have been scouting and calling in.  Further I believed that this was work of the lion from the post, “The Length of 308 Cartridge.”
(Mule Deer herd seen while scouting)﻿
I immediately organized my pack, put the rifle in the truck and headed for the valley.  I knew the lag time in the reporting was not good.  Pumas will rarely stay near a kill for more than a few days and I was facing a timeframe of at least a week since the deer had hit the ground.  When I arrived I set up a call stand several hundred yards above where the cached deer was reported.  I called for approximately 90 minutes and received no response.  I briefly looked for the dead deer but could not locate it.  Continuing further up the valley I made a second call stand and once more no lion was sighted.  The sun set and the light was failing, I headed out, vowing to return the following day.


The next morning I was in a call stand at first light and again called over the kill site area.  After nothing appeared, I knew it was time to find the kill and scout the area further.   What remained of the deer was in a small drainage which fed a larger one that runs through this particular valley.  Scavengers had already performed their handiwork and scattered most of the carcass.  However I was able to find where the deer had originally been cached.  Torn hide and clumps of fur confirmed the cougar kill status.  Under a nearby juniper bush I discovered a fractured piece of leg bone.  An animal had consumed a portion of the deer while hiding in the cover the low hanging branches.   Teeth marks were evident in the bone and I believe either a coyote or the lion was responsible for this.  These two predators are the only ones active at this time of year with enough jaw strength to break such a large bone. 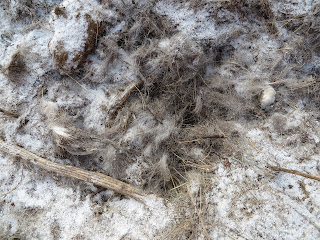 (Deer kill site, above and below)
﻿ 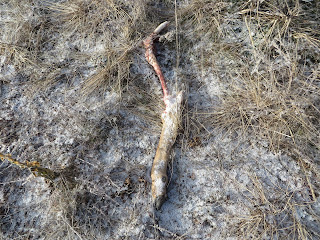 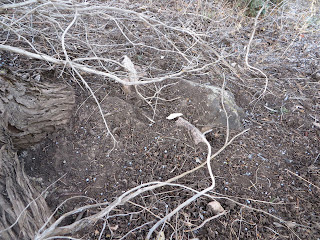 
Leaving the kill site I scouted the surrounding ridge lines looking for the lion’s lay-up.  Several miles of walking the rough terrain resulted in the discovery of just one old lion scrape and scat pile.  While trekking I saw a mule deer doe standing very still about 400 yards in the distance.  I found her behavior odd as she did not move for over ten minutes.  How she was acting reminded me of horses who sleep while standing up and I thought this might be the case.  I observed the doe in my binoculars and found there were three magpies repeatedly landing on her back and then flying away only to return shortly.  In 25 years in the woods I have never seen magpies and deer exhibit this behavior.  It was later I would learn that magpies will eat the ticks off a deer’s back, or collect the ticks and hide them for later consumption.  I had witnessed the real life definition of a symbiotic relationship unfold in front of me.


While I completed the several mile scouting trip along the ridge top I pondered about the one opportunity I need to be a successful puma hunter.  I do not know when or where it will occur,  all I need to do is get close enough to put my calls in a cougar’s ears, the rest is up to him.  Whether by chance, design, or pure determination I will continue on to discover my opportunity.
Posted by Unknown at 7:53 PM