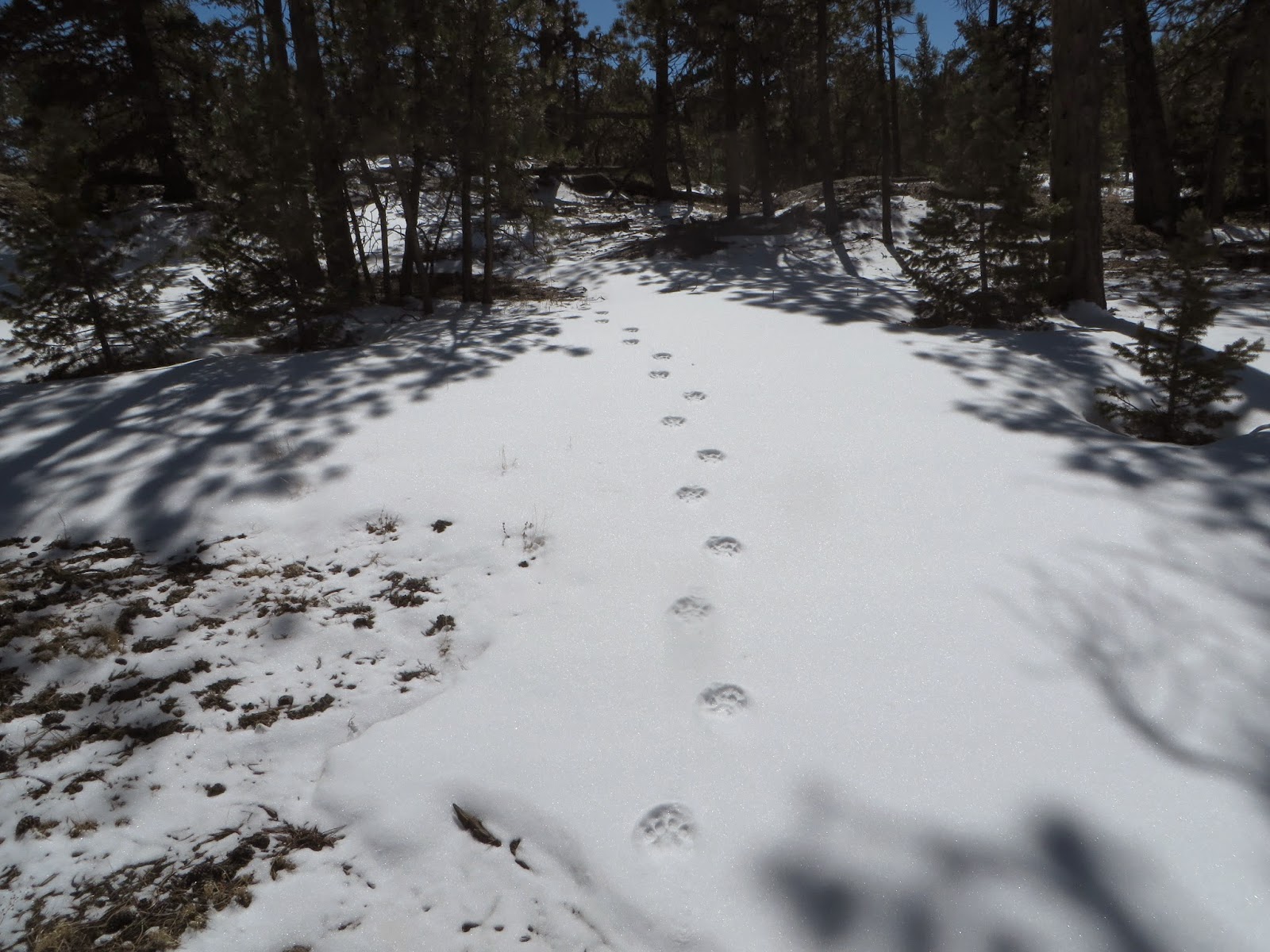 WHOOOAAA, WHOOOAAA,  STOP, STOP, STOP!  I found myself yelling this out load to the suburban as I rounded the corner in the snow road.  It is odd how we act in moments of excitement, I was treating the machine as a living breathing thing that would respond faster to vocal ques, as opposed to only manual input on the brake pedal.   Despite the yelling and verbal coaxing the ancient truck slid on the snow covered ice and ground slowly to a stop in the middle of the mountain road.   I wanted to stop as fast as I could because I was driving over the very thing I had been so earnestly trying to locate all morning and possibly for the last two years.  I talked about this phenomena in the post," 40 MPH," but when know what a lion track is you can instantly spot it, there is no question as to what wandered through snow.   I had only needed glance at the middle of the road as I rounded the corner to know a lion had walked down the middle of it.   As the snow had fallen the previous afternoon, I knew the track  was recent and my hopes soared for a fresh trail as a slammed the gear shifter into park and hopped out to investigate.

Two cats had actually wandered down this particular stretch of roadway.  One was a  bobcat and the other was the largest lion track I have ever seen.  I saw that you could actually put the entire bobcat track completely inside just the pad portion of the lion print.  Like most hunters there are trophy animals that inhabit our dreams and fill our heads full of hope to one day find them in the field.   This was my dream cat, but also one of my nightmares.  This is the cat I do not want to call in alone, a giant tom lion that is afraid of nothing and could easily see me as prey and would not be deterred by my 6 foot frame.  At the same time he is the pinnacle of lion hunting. To take one of these toms would be an achievement hard to equal in my hunting career.  Just looking at his track sent shivers down my spine, and electrified feeling of knowing that I was going to get a chance to stalk the master of stalking.   I was going hunt the ultimate apex hunter of the Colorado mountains.  Needless to say I was very happy I had brought the AR-10 with me that morning and chose to leave the 15 snug in its rifle case at home.  Should I catch up with this lion the .308 cartridge would be needed.


That day was of course was the day I had in-inadvertently left the track measuring ruler at home, I had to go to my old standby, a .308 shell.  The track swallowed the shell with room to spare and made the cartridge look like a .223 as compared to other lion tracks I had laid it next too.  After I took several photographs I cleaned the snow off the round, made sure it was dry, and loaded it into  the stack in the magazine.  I silently prayed that it would take flight this morning and find it’s mark in lion flesh.   I checked the GPS and was pleasantly surprised to find that I was in an ample amount of national forest land and had plenty of country to try to track this beast down in.   I knew I was behind this cat more than I wanted to be.   Even if he had crossed this way at first light, I was still 4 hours behind him.  Odds were these tracks were from earlier in the morning or even before midnight.  My only hope was that the lion made a kill close by or had bedded down for the day. 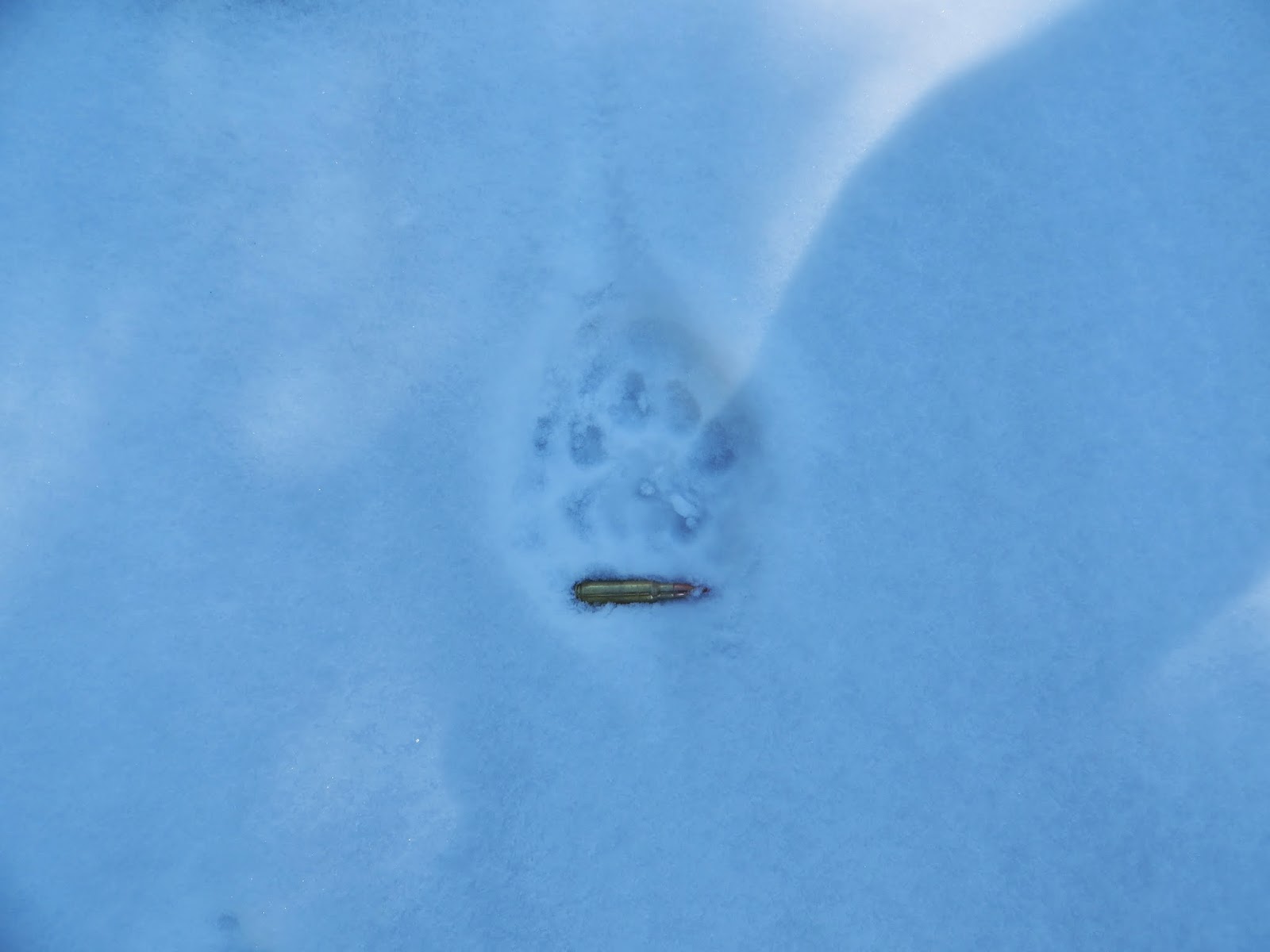 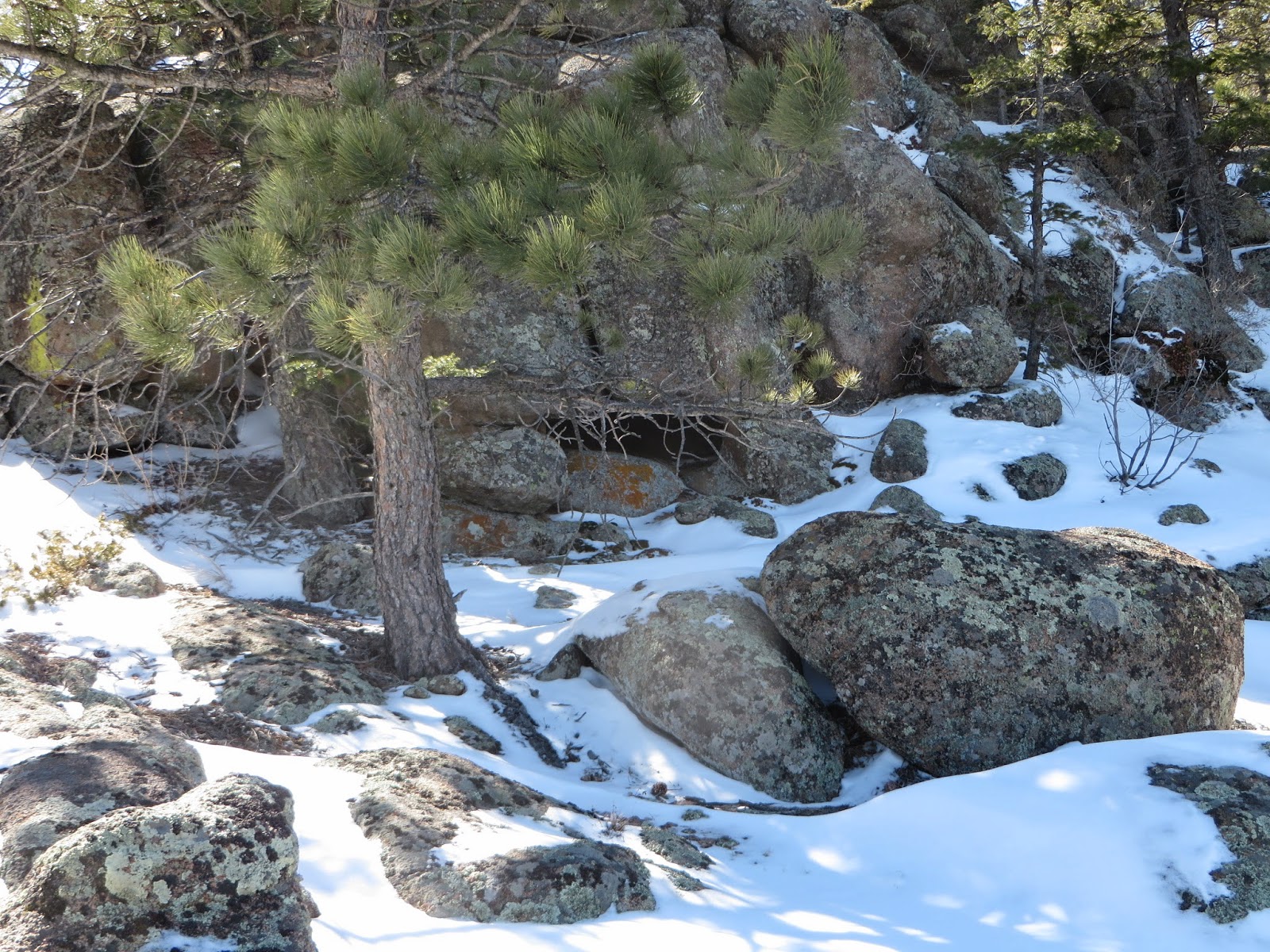 Tracking this cat was difficult at times.  Often he would enter a rock pile and then leap from rock to rock until he exited the pile at some other location.  As the sun was shining bright, it  had already melted the fresh snow from the rocks and I was forced to circle each large section of granite to find where he left it.  Several times I lost the trail entirely on south facing slopes where the snow was sparse and I was had to start concentric circles until I found him again.  After a while he became predictable.  He seemed to always be heading due south, and would avoid deep snow at nearly all costs.   If I lost his track I would simply apply these perimeters into the terrain of the area and often find his print right where I expected to.   I noticed he kept the same gate in his stride for several miles, only broken when jumping.  Once I found his tracks shortened and where so close together they were almost covering each other.  Several yards later I discovered why.  The lion had gone into stalk mode and made a kill attempt on a group of bedded bighorn sheep.  I found the beds of the sheep and their running tracks in multiple directions.  The cat had scattered them and failed at a kill.  I seriously wished he had succeeded as a kill would have meant he was very close by and likely to return in the afternoon for his proverbial, “seconds.”  I had no such luck, the lion followed one sheep for a short distance but shortly gave up the chase.

After several miles and 3 hours later,  I found myself approaching a large 40 foot rock wall that ran the distance of about 50 yards.  The Lion was headed straight for the wall. The shrubs and bushes were very thick  at the base of the cliff and I knew it was the perfect bed.  I scanned the trees, rocks and everything around the base and top of the cliff, but there was no lion in sight.  I followed his tracks and saw he clearly approached the wall and then walked along its base into the tight cover.  I knew there was a high likelihood this was the lion's lair for the day.  There was no use going head long into it, I could not see very far to either get a shot or defend myself.  I instead circled around the cliff and found there were no tracks leaving the wall.  I doubted the lion could jump the 40 foot vertical rock and it was a good chance the lion was still in the cover or in a cave at the base.  I continued my circuitous route until I was at the top of the cliff and I ever so quietly and slowly crept to the edge and peered over.  The Lion had made his bed at the base, but was no longer there.  I could see the matted branches and snow where he had curled up.  Walking down the cliff edge I found a hidden crevasse the lion had crept up.  The melting snow told the tale, these tracks were hours old.  The possibility that I had spooked the cat was very little, I was simply just too far behind him.
I consulted my GPS and discovered that I was very close to the dreaded private land, with no national forest in sight.   I had only one option left, run a call stand.   90 minutes of sounding like a hurt rabbit, a dying deer, and a juvenile lion produced nothing.  I had to call off the chase. I had all but lost the trail on the south facing slope in the afternoon sun, and legally I could not trespass.  From the maps I could tell the private land the lion was headed into was what I like to call homestead territory.  20 acres of woodland with a  cabin on each parcel as summer/weekend  mountain get away for the city folk.  It was hopeless to seek permission.  I would have to call many landowners just to walk a few hundred yards, and that was if I could convince them to grant me access.  I wondered if they knew just how big of mountain lion was calling their get-away, home.

Before I left the area for my hike back, I stopped for a moment to film a video clip for a new series I have been thinking about.  I have been wanting to start a new set of posts about my gear and how I use it.  I decided to create my first video of my gear starting with my rifle.  Below is the finished product and I hope you enjoy it.

I was very elated as I trekked back to the truck.  It was true I had not even seen the lion, but I had walked in his tracks for several miles.  In four hours I learned more than I have from several books, articles and biologists.   This tom was the best instructor I have ever had in lion biology.  I thought about where the lion was and his size and I realized I had seen this cat’s tracks  before.  Twice last year I found a large tom track in this area at different points.  Age that tom a year and you would have this lion.  Analyzing the location of the other tracks and where he was headed, I soon discovered I knew I decent area of his route.   I also found his track near the end of my snow road route I drive.  If I had reversed my route I would have found him at first light and been right behind him.

Snow is coming to my mountains tomorrow.  Sunday morning will find me running those snow road but this time I think you know where I will start.