Enterprise and the Trac Grabbers

When I started this blog I did not have any idea of where I wanted it to go, or what it would become.  I had a basic vision of sharing my outdoor world with a wider audience, and was hopeful to perhaps inspire others to take up the mantle of hunter.  I perhaps had some loftier dreams that I might be able to bridge some of the gap between the non-hunting world and that of the outdoorsman.  I knew in the back of my mind there was a possibly that product manufactures might be interested in what I do, but this was always destined to be on some far off day, or so I thought.

It was my "How To Get Unstuck" video that introduced me to Jim Perry of Trac Grabber.   This was the same video that was welcomed by my co-workers with many laughs and several applications of the name, "Hillbilly" when they first viewed it.  I personally prefer the term, "mountain man," but that fight is for another day.  I even hear that the co-workers have a re-make of that video in the works, featuring the, "Yakety Sax,"  music.  Thankfully that specific song is copyrighted.

Jim had seen my video and wanted to offer me a chance to demo his new product.  The Trac Grabber is a unique product that straps over a tire and incorporates a rubber block that sits on the tire face.  This not only adds traction, but also lifts the vehicle when the Trac Grabber contacts the ground.  This lift factor is a huge addition to getting a vehicle out of a situation where it has sunk in the mud, snow, or sand.  Jim told me he had specifically developed these to help people avoid being stranded and stuck in a bad situation.  I could tell from speaking with him that he was very passionate about the safety of travelers, especially those who might not be versed in a vehicle recovery.  Jim offered to send me four Trac Grabbers to test out and send feedback about what I thought of them.


When the box arrived last month, I was excited to see them and actually get some hands-on experience with the product.  After a test fit on the dry roadway, I was ready to head to hit the hills.  There was only one problem: I did not have time, nor were the conditions right.  The mountains had already warmed in the mid-April sun, and while there certainly was some mud to be found, I wanted to try them in my favorite conditions; snow. Sadly, the Trac Grabbers have been relegated to sit unused on my computer desk for a few weeks.

Somehow the stars aligned and allowed me a solid day off from work on the same day the gods of winter smiled on me one last time before dismissing me to the heat of full summer.  A huge snow storm had deposited several feet of fresh snow in the mountains where I like to hunt.  It was the type of snow that is wet, heavy, and loves to cling to vehicles and entrap them.  The best description of this type of snow is "snowman-making" snow.

As I drove to the mountains I thought about what I was going to do.  I was going to have to purposefully get my truck stuck, and preferably stuck in a fantastic fashion.  It was never something I had set out to do intentionally, and of course in true Colorado Hunter's Life fashion, I was alone.  I was confident that the Trac Grabbers would work, but I also had a host of shovels, tow straps and chains in the back of the Suburban just in case.  Taking these tools with me is kind of like car insurance: you hope you never need them, but still want to have them just in case. 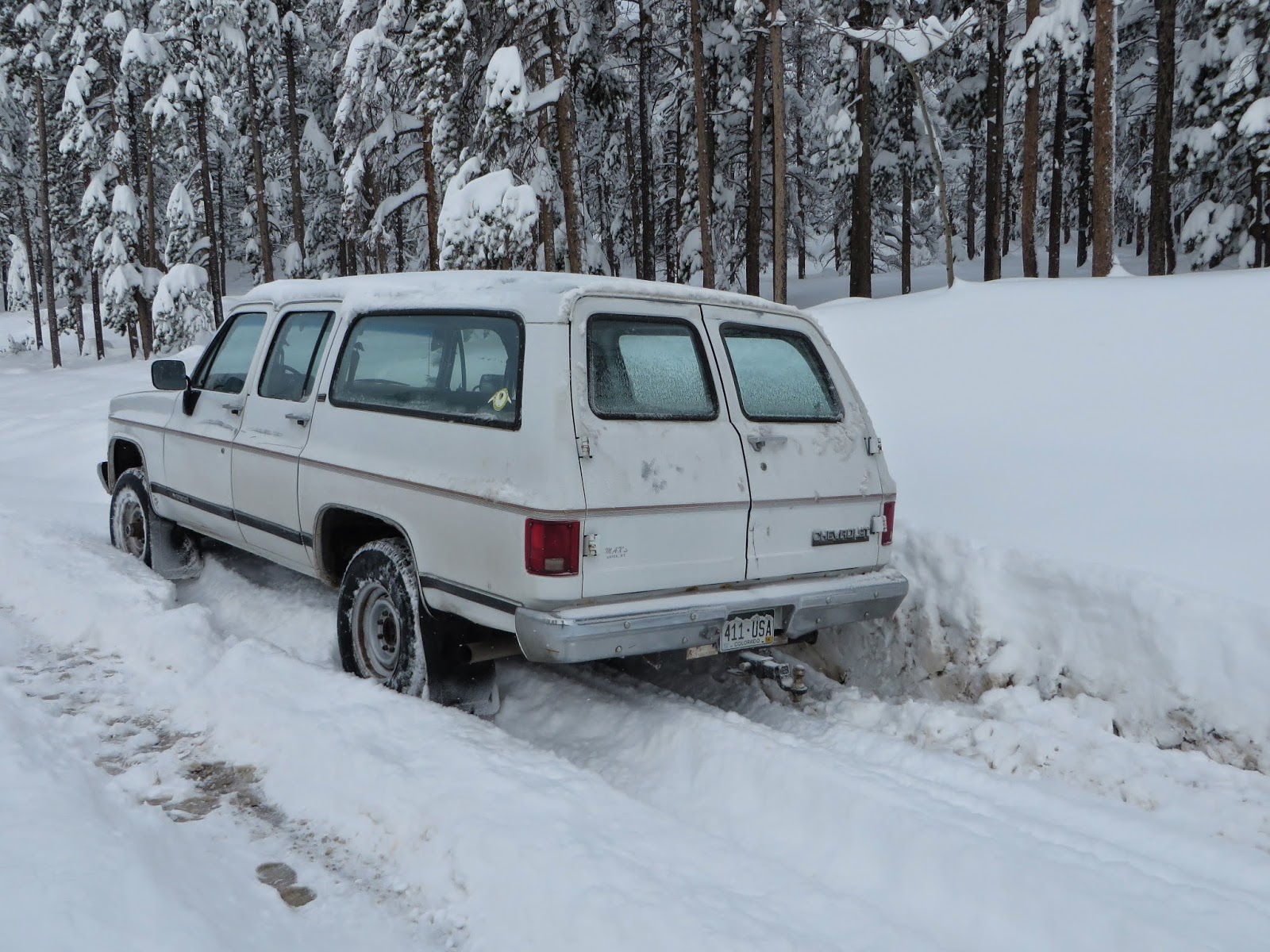 I selected a spot on a roadway I knew there would be vehicles traveling down at some point that day.  It still was a battle to turn the wheel and power into the side of the snowbank at just the right spot to get stuck.  The first time I used the Trac Grabbers I was able to get out too easily.  The solution?  I backed up the truck and  buried the truck to the frame in the snowbank/ditch.  The snow was up to the bottom of the passenger windows on the right side. Usually the only way out would be hours of digging, or a tow truck.  I am sure I was quite the sight to the few people who passed me while I was working on getting out.  Of course being good Colorado mountain residents they each stopped to check on me.  They were flabbergasted when I turned down offers of assistance, but all were interested in the Trac Grabbers I was testing.

As the third person drove away I was reminded of an old story.  It is the story of the man trapped on top of his roof during a flood.  He prays to God to save him.  Shortly after a man comes by in a canoe and offers him help, the trapped man replies that God will help him.  A little while later a rowboat comes floating by and the occupants calls out for the man to swim to the boat.  The man still refuses the offer.  Soon a helicopter hovers over him and throws down a rope ladder.  The man declines the air rescue again having faith in God, and then the helicopter leaves to helps some other poor soul. The waters swiftly rises and the man then drowns and dies.  Once in heaven he stands in front of God and questions why God did not save him.  God is confounded and replies, I sent you a canoe, rowboat and even a helicopter!  I have to say that I felt a little like the man on the rooftop when each offer of help drove off into the snow.  Nonetheless, by using the Trac Grabbers I was out in less than twenty minutes, and the only digging required was clearing snow to get the grabbers on.

I decided to film the use of the Trac Grabbers, and later made a video about their use and how they work.  I also stopped for a short time to film a segment on how to put on tire chains.  Both of the videos are posted below. I hope you enjoy them!

As for the title of this post?  It is an idea of what this blog might become.  Not only an outlet for me to write about what I do and share my life and thoughts, but perhaps a place for enterprise.  A place of enterprise for me, and a place of enterprise for the Jim Perrys of the world.  People who have great ideas and go out on a limb to see them realized.

Closing thoughts this time belong to the great Fred Bear.  As I am sure this is my last outing into the snow for the year it only seems appropriate.  " With the end of season comes countless hours of longing to be back in the woods with a bow in hand and the chase in your heart. " - Fred Bear